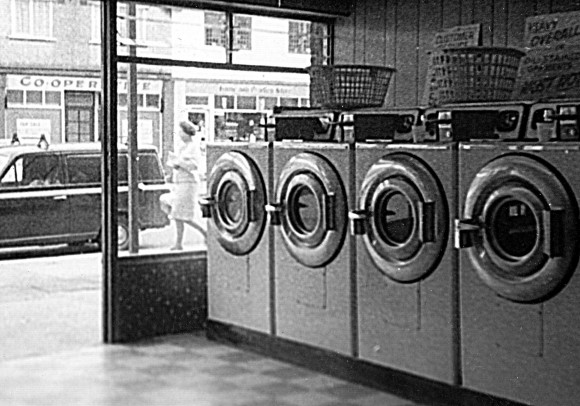 When I was around 9 years old I started my long trek, with the shopper on wheels which was a 20 minute walk in all weathers to the local launderette in Irby Village, Merseyside.

It was my job to help around the house, as my father had just returned after 8 years being at sea, my sister was born and mum had to go out to work to support us all.  I hated having to do the week’s washing every single week for the next eight years. The worst time was during the winter, as there were no excuses, I still had to make that long lonely trip to the laundrette.   The only consolation was when I got inside from the freezing cold I could warm myself up by the dryers.

This trek went on until I was 16 years old and then I left home, thank god.  During this laundrette saga I could never understand my father’s obsession of having a new car every few years, which just sat there in the driveway taunting me, only ever being used for his pleasure, never to help his family such as venturing out with the laundry in its boot.  Being a shiny new Saab, my father’s pride and joy which he washed weekly could not be seen parked outside a common launderette.